Welcome to the Free Recipe of the Month! Remember the free-recipe-of-the month is free just for the month that it's featured in!  After that it's retired to the Complete Betterbaking.com Recipe Archives. 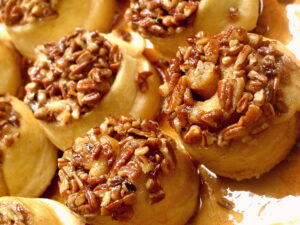 Sour Cream Maple Cinnamon Schnecken
These can be made a day ahead and left for a slow, cool rise in the fridge. A touch of maple syrup in the pan glaze makes these as perfect as the first thaw of winter. Make these regular or mini sized to give out as gifts.

For the Sweet Dough, in a mixer bowl, whisk together water and yeast and let stand a minute and then stir in the milk, butter, sugar, salt, vanilla, almond extract, sour cream and cinnamon.  Fold in most of flour and mix to make a soft, but kneadable dough. Knead 6-8 minutes until dough is smooth and elastic only adding in more flour as needed to make a soft dough. Cover with plastic wrap and let rise until doubled, about 45-60 minutes or you can do a cold rise, overnight.

You can make these in a pan, like a 9 by 13 inch (it fits half a batch of the dough) or in muffin tins. Generously spray two, (preferably non-stick) muffin tins with non-stick cooking spray.

Gently deflate dough. Let dough rest about ten minutes and divide into two portions.  Roll out one to an 18 inch square, between 1/8 and 1/4 inch thick.  Brush with melted butter and sprinkle on half the Filling Ingredients including the brown sugar, cinnamon and pecans. Roll up, starting with edge of dough closest to you, into a snug roll or jellyroll. Cut in 1 and 1/2 inch slices - you should have about 20 slices. Repeat with remaining dough and filling.

Meanwhile, for the pan preparation, for the Maple Cinnamon Glaze, add the brown sugar, maple syrup, butter and cinnamon to pan and spread as evenly as possible on pan bottom.

Alternatively if using muffin cups, drizzle a little cinnamon glaze into each prepared muffin cup and then place a schnecken inside each cup. Cover lightly with plastic wrap and let rise 40-55 minutes.