Happy May 2018 and welcome to the festive month and one I consider it the crown of spring. It’s a feminine, blossoming time, tender with the potential of so many good things to come. May is also my birthday month and of course, for many of us, it’s also Mother’s Day.  So it’s natural that it makes me think of about the various mothers in my life, some still here and some pivotal ones who have left for greener baking pastures. There’s also my mother-friends/sisterhood who are either mothers themselves or simply nurturing people. All in all, there’s a lot of girl power in May that made me reflect on that one item that was once so important and now is a relic: the recipe-box.

Do you remember the recipe box in your house? No? Guess you’re circa 1985 and afterwards. You poor thing.
Recipe boxes, newspapers clippings, hand-written index cards and written out recipes (with a fountain pen!) on plain paper have been with us for hundreds of years. It’s only in the last 15 years that recipes, on paper, penned, printed, scribed or sometimes typed, began to disappear. No one writes things down on paper let alone puts them on an index card in a box. Well, maybe some people but it’s a disappearing art, let me tell you.

A friend and I were going through our mothers’ recipe boxes, chortling over the little notes our mothers had written on the recipe cards. Although my friend and I are from vastly different backgrounds our mothers were the same generation. Hence recipes for Chicken a la King, Mac and Cheese, Meatloaf and Fondue (as well as, oddly, some tofu recipes) figured in both recipe boxes. ‘Lil’ makes this best’ or “Bernice serves this after card games’ or “Ann uses soda crackers as the topping’ or “Best Kugel Recipe from Goldie’ were the sort of warm and wonderful, personal, hand-written comments that were sprinkled on the cards and slips of paper. It was an echo of our mothers’ voices and also a testimony of lives lived, people engaged with and a whole sphere of social connection that was so real. Shared recipes was proof of people’s connections and endorsements and evidence of the fact that people actually made those recipes and passed them on. It was viral in the best of ways. People gave compliments, not hits and clicks. They actually made and ate the food (with friends and families), not just photographed or took selfies of food hoping it would get views from….ah….strangers. 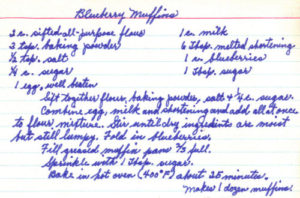 Just think of those days when recipes were attributed, shared, crowed about and made the circuit. Think about those pre-foodie days when a woman’s reputation (creativity, skill, domesticity) was reflected in those recipes and those recipe boxes. They were gold, all of it, pure gold.

Those recipe boxes which my friend and I hold onto with so much love and reverence captured an era that will never come again. Each of those sacred family recipe boxes is also a family legacy in a food and a tactile memory that we can hold in our hands or just make those recipes to feel those tethers of love. (And yes, the offspring of my friend and I, our millennial children, six sons between us, probably don’t want to inherit the family recipe box. They’ll be happy with some Word files or recipe app and even then — doubtless they delete that too).

This also reminds me of an occasion recently when I asked for a recipe at a cookie exchange at my hair salon. One recipe was so outstanding I had to ask for the recipe. If I asked for it, you can imagine how amazing and different it was. But I was refused! The young woman informed me it was her grandmother’s ‘secret’ cookie recipe and no one could have it. Although I respected that I was confounded. I also got industrious and recreated the recipe herehttps://www.betterbaking.com/recipe-items/cranberry-cherry-italian-butter-balls/ as best I could because it was that good! (And luckily I can replicate almost any recipe because that's what I do) 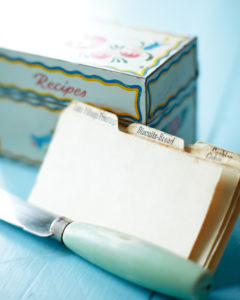 Truth is, I’ve rarely encountered someone who wouldn’t share the recipe since most people are flattered when asked. So I try to appreciate why someone wouldn’t share. Do we feel more special or protected if we with-hold something? Whatever is it about? It is something to do with power and identity I guess. We all want or need to be special and perhaps for some people that means not sharing the recipe. It’s hard for me to fathom what not sharing a recipe is about (or leaving out an ingredient which I honestly believe is often an oversight) but I must respect it. Clearly it all touches on something powerful that while foreign to me, is of unique value to someone else.

As a chef and cookbook author, the irony isn’t lost on me. Even though I’d like to, I can’t give away all my recipes since it’s my profession. But on a friend-to-friend level, even with a stranger in a supermarket line-up, I give it all away in a blink. I jot it down or email it to a stranger and I rarely even mention it’s my thing or that I write cookbooks. I might be incognito or sometimes I do disclose what I do but I share. Because sharing is half the fun of it and logistically speaking, you can’t cook for the whole world so you really need to share the recipe if you want people to enjoy it as you do.

But may I just suggest that a great recipe is worth sharing because not shared will ensure that a recipe hastens to a premature disappearance. And food, as passed on via recipes, i.e. the documentation of a food experience, is a vital thing. Food, as ‘haiku’d’ by the format of a recipe, which is in a sense, a secret formula or code, is about culture, communication, and history. Not the least (probably the most important) a shared recipe is love paid forward, over and over again. So, share the recipe, extend the love — food and love were never meant to be hoarded, denied, or hidden — only celebrated. It’s the original stone soup of heart math.

To start you off, I am sharing a free recipe for my Oreo Cheesecake.

Bagel Book is an Ebook! 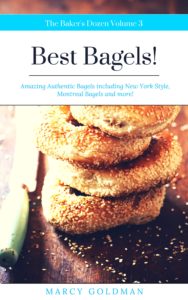 Also please know that the Bagel Book IS an eBook you can only purchase at my website on the Cookbooks page. It might not come to Amazon but you can always get it on my website. It is a book that opens on any device you have with the added perk that you can also print it out.

Please also know that very soon the recipe single purchase won’t be working at the old site. Membership is the only way to access all the recipes (new ones each month and the 2500 in the recipe archives). We accept checks and Etransfers for those of you who prefer not to use Paypal.

This is not baking; this is life!
Warm wishes from my kitchen to yours,

Marcy Goldman is the host and creator of Betterbaking.com, as well as several cookbooks. She's also a contributing food writer for the Washington Post and Costco Magazine.
View all posts by Marcy Goldman →
A Note from Marcy April 2018
Essential Oils and Diffusers, a Primer